Im gonna start a new section combining my 2 favorite things... Redesigns and stories, and theres nothing I like more than taking characters and that arent really dark or creepy that I like and making them feel Awesome and Epic like Joss Weadon or Geoff Johns had written them... From now these shall be called... "Awesomed out" designs... cause I love that word :)

10 years have passed and Metroville is about to celebrate its annual ceremony of the Infamous attack of the Omnidroid. Renowned worldwide for reintroducing the world to the importance of the supers, and most significantly to earth’s premier and most famous team… The Incredibles.

With the aid of the supers and the Incredibles, earth celebrates an almost utopia of peace and prosperity. Even among the family of the Parrs. Dash, ever the youthful spirit, is growing faster, breaking the speed of sound twice, it is highly predicted that if he continues his rate of growth he could be one of the fastest speedsters in recent history . Violet, grown more confident and assured of her self from years fighting crime with the family, is preparing to leave home, looking forward to college lifestyle and not living under the familiy’s shadow. Mr. and Mrs. Parr couldn’t be happier seeing the kids go into the family business, training them, teaching them. All seems well in the Parr household…

Over the last 10 years, Jack-Jack has proved to be a wildcard in many of family’s battles. His powers have maxed out any in recorded history, and growing… His abilities display almost cosmic levels. However, this gift… Is also killing him. In a few months time, meta human doctors say his powers could overload causing one of two things, he turns into a black hole, destroying 43% of the galaxy or he’ll explode, destroying 98% of it. Faced with this horrible news, the team decides to continue with business as usual until they can find a solution

After saving the city with the aid of Frozone on the eve of the anniversary, they are attacked by another omnidroid… Long seasoned and battle hardened since their first encounter years long-ago, they make short work of the relic from their past. However, as Frozone inspects the fallen machine, it explodes, horrifically scaring and destroying much of his face and right arm. As other supers rush to get him medical attention a holographic message appears. The shadowy figure speaks…

and thus the shadowy figure’s image turns into clock

The Incredibles don’t speak, for the horrible truth of their long dead foe, clearly not deceased, hits them like a ton of bricks. Having Edna trace the message to its origins, they are met with a horrific discoveries… thousands of distress calls from around the universe, all in alien languages they couldn’t understand, screaming, in pain, murdered, and destroyed… only one word common in all the alien distressed messages… but what did it mean, what was all of this?

From what Bob could put together, Syndrome had been brought back to life by some alien; enhancing him, making him seemingly bigger, stronger…

Frozone, not one to stay out of a fight for too long, quickly has Edna redesign him protective armor, to help protect his body while it heals, but also support him so he can stand against the upcoming threat with his fellow supers, and the Incredibles…

But with Jack-Jack dying, an injured Frozone, an ominous countdown, and an old foe seemingly back from the dead… what does this mean, and if someone were powerful enough to bring back Syndrome and seemingly bring him back more mighty than before…then how powerful must this new foe be… and more importantly, could they stop him?

And that simple word, that simple alien word repeated over and over again, screamed in fear and pain, what did it mean? 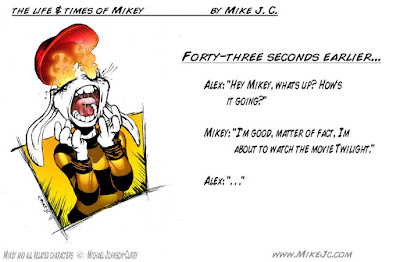 So... yeah... I finally sit down and watched Twilight... My God! how do you girls live with yourselves dragging your boyfriends to see these. Now ive read all the books (dont ask, lets just leave it at not having a girlfriend leaves me with alot of free time) and my only problem with them was that Meyer was a skilled writer, this series just wasent meant for my kind i.e. anyone with a penis. Not liking the books, i saw little point to seeing a water down version of it.
I should have listened to my first mind.
The movie itself is alright, the characters are fine, and Edward is just an unrealistic (and quite frankly creepy )adolescent geek girl fantasy. Hell us guys even have female equivalents . I even thought its action sequences were ... tolerable.
NO, 99.99346% of the problem with this movie is this little tart right here
Bella is the most annoying, selfish, and bratty film character in the history of cinema. Let me get this right, you've got two powerful, sexy (no homo) and somewhat clingy guys madly in love with you and a decent upper middle class life, with plenty, PLENTY, of friends...AND YOU HAVE THE NERVE TO WINE ABOUT HOW BORING AND LAME YOUR LIFE IS!!!!!!
so yeah, i wasn't a fan of the character and since she is 99.99346% of the movie, by osmosis, I didnt like it either. This educational film does put it far better than i ever could.
Since ive spent the best part of this blog complaining about things I dont like, lets go over things I do like:
*Comics
*Boobs
*The Flash
*Boobs
*Things that are Epic
*Things that make me say AWESOME!!! (cause it annoyed the living hell out of one girl I once dated)
*hot geeky chicks
and ummmm *boobs
well, till next week guys
Posted by Michael Johnson at 5:58 PM 3 comments:

Short update for today, just posting up a finished inked page of a project i just finished. hope ya enjoy. 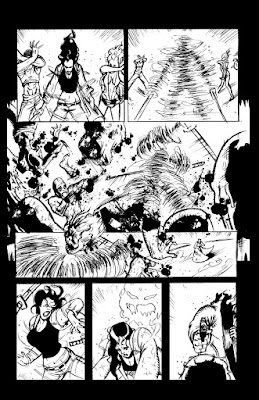 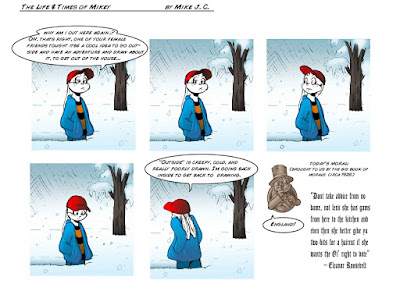 Yea... Ive got a strange sense of humor, I blame this weird Texas weather. Its been snowing and uhhh "ice-ing" for like 4 whole days. meaning ive been going crazy inside the house more than usual. So I mainly just draw and watch movies with the rest of the family a.k.a. "cant be quite and not talk during any movie people". But last night I was talking to one of my friends on the time suck which is Facebook and she commented on the fact I need to get out more (no car or girlfriend with car can do that)... Im famous among my friends for drawing and practicing till my eyes run red :P She recommend this whole go out have fun and draw about what happens.. it will be fun.
Well, after I deleted her from my friends list i decided to give it a try.
I made it 2 steps out before I decided to go back in my house and just watch Ip Man 2, back to the future part 3, and just draw.Well there ya go, and thus another week goes by being stuck in the house without seeing another person my age (going on 2 now) or work. Im gonna have to get paying work soon to fuel my sexy anime versions of superheroes statues addiction; at least some work will get rid of the boredom.
Incidentally, I'm almost done with the collaborative project Ive been working on with this writer and should be able to put up pages soon
Well, back to practice
Posted by Michael Johnson at 1:34 AM No comments: