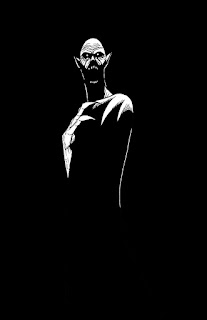 My name is [redacted] I work for Ididian Containment as a low level security officer. To pass the time I've been making these journals during shifts, little sketches of what I see here every night.
If you are reading this, something has happened to me...
And you are in grave danger.
Journal 13
Since Jim was [redacted], all lower level security have been spread all over the place. I’ve been moved to some of the lower levels. Looks like every security officer will be partnered with a SRC (Supernatural Response and Capture) agent for the foreseeable future. (I think this may be a combination of they’re no loose contained and they don’t want anybody [redacted] the [redacted] like Jim did.) I think my assigned agent may be female, but they are so heavily armored and so rarely talk I can’t tell.
So this little guy is Contained #89, apparently he is one of our oldest contained. Caught in 1992 in [redacted] by a descendant of the monster hunter [redacted] [redacted], one of our earliest agents. So what I can gather from the files I read on him he is ranked a 4 danger level (out of 5, 5 being the highest), and is well over 2,345 years old. Contained #89 I incredibly fast and dangerous, is fed one pig a week, but it prefers to feed on the internal organs of virgin, catholic females. For this reason it is only to be fed by male atheists, and only on Sundays as per [redacted] customs.
Contained #89 is highly susceptible to light and is kept in a pitch black cell with no lights. However his cell is suspended above a spotlight emitting UV rays. Even if he were to escape the cell he would immediately be trapped by the light.
While light has shown to hurt it severely, no known method of eradication has been found. Methods tried so far include, decapitation, gunfire, burning, stabbing, [redacted], exorcism, [redacted], [redacted], [redacted], baptism, [redacted], holy water, [redacted], silver stakes, [redacted],starvation, and [redacted].

So far contained #89 is just kept confined to keep it from attacking the general populace.
Posted by Michael Johnson at 12:46 AM