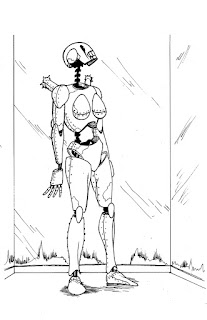 My name is [redacted] I work for Ididian Containment as a low level security officer. To pass the time I've been making these journals during shifts, little sketches of what I see here every night.
If you are reading this, something has happened to me...
And you are in grave danger.
Journal 24
Big sister 12
Today the building is super tense, from what I can gather it’s due to us getting these Contained called “Big Sisters”. So a lot to get through so let me explain what best I can figure. My building I work at is actually called “Ididian 7”, turns out there are 12 Ididian buildings around the world collecting contained. Ididian 7 is focused on holding more aggressive and dangerous contained. We are also the home base of the SRC (Supernatural Response and Capture) I guess the thought is to keep your enemies close but friends closer I guess.
The big sisters from what I can put together are all humanoid Contained with varying and immense abnormalities. The majority of them as far as I’ve read aren’t very dangerous, but from what I hear they are numbered based on their threat to personnel among the 12 of them (I’m guessing 1 is the most dangerous maybe?). I’m learning a little more about them every day; this is 12 and comes from Ididian 2 which is our more R&D building, containing more level 3 objects (5 being the highest danger level).
From what the eggheads upstairs have told me (in between them rushing around trying to stress-check all the containment cells for the incoming Big sisters). The Sisters have been going crazy and restless as of the last few weeks and damaging their cells and attacking guards, so while each of their cells is being reinforced we are going to be housing them until repairs and reinforcement on the cells are completed.
12 as far as I can find out is “robot” with a human skeleton at its frame. The scientists have discovered that 12 exist in [redacted] different time lines and [redacted] different realities. Supposedly she is the least dangerous of the “sisters” as she stays completely motionless, 24/7. She is kept in a completely shatterproof glass containment cell.
2 weeks ago the “happy face” drawing appeared on her face; when work crews went in to investigate and clean her she [redacted] 3 of the cleaners, [redacted] [redacted] 29 of the guards, and [redacted] a SRC agent on location with his own [redacted] . All told, 24 died that day, 12 herself has not been touched since that day, after which she returned to her original standing position.
And this is the least dangerous one?

Posted by Michael Johnson at 3:56 AM