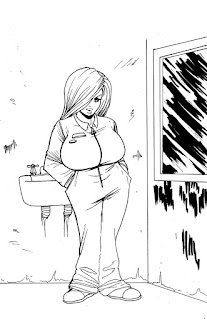 My name is [redacted] I work for Ididian Containment as a low level security officer. To pass the time I've been making these journals during shifts, little sketches of what I see here every night.

If you are reading this, something has happened to me...
And you are in grave danger.
Journal 28
Big sister 8
OH. THANK. GOD.
A none scary one… Big sister 8 comes from Ididian 8, this building houses more criminals with abnormalities than anything. Sister 8 has the ability to, I might misspell this, “Antithesis Seibetsu”. The eggheads upstairs tried to explain it to me but it was way too complicated so I bounced!!! Lucky me, she wasn’t causing any problems, but her twin sister, Big Sister 5, caused trouble trying to get her so she was t̶i̶t̶t̶y̶ totally brought in to be on the safe side
Basically I’m supposed to stay away from her at least 2 meters, because a side effect of her abnormality on the human body is rapid bone shifting, which once complete can cause headaches and other mild internal problems. Lucky im not effected though… The Science dudes got tired of explaining it to me a bunch of times and were just like, “look, her making your bones shift isn’t the thing to be worried about, the shifting happens because of…forget it, just finish your report and get to sick bay, we apparently can’t talk when you’re like this”
Whatever man. The new scientists had a great r̶a̶c̶k̶ b̶o̶o̶b̶s̶  personality though… I mean she’s totally not on par with “Big” sister 8 here, but she can work it, great a̶s̶s̶  pocket protector also brah!

So , like, everything has been going okay with the other Big Sisters, I guess I never noticed how HAWT they were before today, I mean, Big sister 11…man if only I was just a few hundred feet bigger, or maybe just MUH DICK!!!!

Totally burned whoever reads this LULZ

Anyway, back to drawing Big Sister 8’s b̶o̶o̶b̶s̶ t̶i̶t̶z̶ a̶s̶s̶ personality… yea! Dude, I need to stop writing in pen.
Posted by Michael Johnson at 4:37 AM