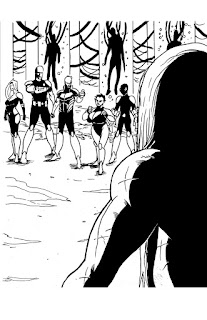 Ididian Incident report form:
[Please do not sign above this line]
The following report is for incident # 8542, hereby known as “No Zero days”
Since Ididian 7 lost all power during this time no security footage could be found, so we will be having our onsite artist depict the events to hopefully show a clearer time line of what transpired.
Survivor 13
Interviewer: Please state your occupation.
Survivor 13: Why? Thought you guys had those o--
I: This is for the record Mrs. [redacted]
S13: oh, well, ummmm, I work in sanitation for Ididian 7.
I: So you mentioned in your statement to the SRC investigators when they found you that you were in the R&D department, can you tell me how you got there?
S13: yea, a big stone contained punched me and my co-worker’s safe room door, we were captured and put in these tubes/tanks in the R&D department. I was fading in and out of consciousness so my recollection of events is a little hazy…
I: okay, fair enough, I’ll start with something simple am sure I already know the answer to. Did you at any point come into contact with First Lieutenant C. Montgomery Maul?
S13: yes
I: okay, next question, did-- excuse me, did you say “yes”
S13: ummm, yea
I: okay this is great, what did he say to you, where is he now?
S13: oh nothing like that, him and like, I think 4 other guys were touching my glass to get a better look at me. Maul put his finger over his mouth to sign to stay quiet, I couldn’t make it out completely but I thought he said “don’t worry, we’ll save you”. I passed out again after that, I don’t know how long. At this point I awoke again but my tube and several others were either tilted over or smashed. I saw Big Sister #1 talking to Maul and 4 others…
I: can you describe them please?
S13: I can’t really remember them outside of Maul, sorr-- Oh wait, there was a red head, one guy had big hands I think, and this one girl had massive ti--
I: okay, I think I know who you’re talking about, go on.
S13: I awoke in the middle of Big Sister #1 talking and she was huffing and breathing really hard like she had just run a marathon or been in a fight or something. She was saying she refused to lose to him or something, that she almost killed him before and would finish him and his little team this time. She then raised her hand; I don’t recall what happened next cause I passed out again I think. The next time I awoke Sister #1 was screaming about how “they created her” and “you’re not better”… I don’t remember what she said after that part, but she mentioned “They want to see power, they’ll see Big Sister #0”. Then there was flash of light from an explosion and I was knocked out.
I: That’s all you recall?
S13: yes sir, sorry I couldn’t be more help.
I: you were great Mrs. [redacted], your husband is waiting for you in the visiting center, after we get this all sorted you’ll be able to see him. Ididian sent out a press release that this was a chemical accident and all the employees had to be held for testing, it should go without saying, you are to keep this cover. This is confidential level Alpha 1-0
S13: GOD!!! Okay, okay, no worri-- wait I remember something…
I: please, go on…
S13: before that flash of white happened, Maul turned to the other guys, I might be misquoting it but he said something along the lines of…

“No matter what she says, we’re more than a team, we’re family...and we go together…”

“No Zero day” death count is estimated to be 451 and 157 Contained at this point.
Posted by Michael Johnson at 1:23 AM