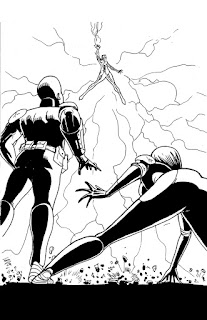 Ididian Incident report form:
[Please do not sign above this line]
The following report is for incident # 8542, hereby known as “No Zero days”
Since Ididian 7 lost all power during this time no security footage could be found, so we will be having our onsite artist depict the events to hopefully show a clearer time line of what transpired.

Survivor 11
Interviewer: this interview will have to be different as survivor 10 did not want to be quoted on the record but was willing to explain what she had seen. The interviewee in question was a nun from Ididian 9; she was holding up in a safe room with several other nuns for most of the events known as “ No Zero days”. She explained they spent most of the time praying and waiting for help. After several days with no disturbances the door to their safe room was ripped open and they were attacked my Big Sister 10 ( the electrical one).

At this point she says Big Sister 10 was intercepted by two unknown combatants, one was a redhead with a headband (I’m assuming Ms. hamerhead of the Unit), the other she described as a large bald man with an “iPad” or something on his arm. She said they had no difficulty dodging her lightning strikes till the red head one mentioned that she could not “connect with its mind” or something to that effect. At this point she says the bald one accessed his arm iPad thing and summoned a spell to lock Big sister 10 in place.

At this point, and she swears to this, she recognized him use a level 18 spell cast that “exploded” Big Sister 10. For the record, a level 18 spell is considered hypothetical in terms of magic users, most magic such as teleportation and transmutation, range around level 4-6. The last known person to use magic this powerful was the magician Merlin, whom to date Ididian has not proven the existence of.
They then asked if They had seen First lieutenant C. Montgomery Maul. they responded they had not; Ms. Hammer then asked if They knew how to get to the R&D floor. To which they replied no. They got them to another safe room that had some people in it already and left.
So from what I can gather “the Unit” must have been called in to assist Maul and rescue the head of Ididian Mr. [redacted]. However, I’ve yet to deduce why they want to get to the R and D department… based on earlier interviews it’s where big sister 1 was held up, but isn’t priority to find and rescue the head of the company?

“No Zero day” death count is estimated to be 324 and 147 Contained at this point.
Posted by Michael Johnson at 7:10 PM