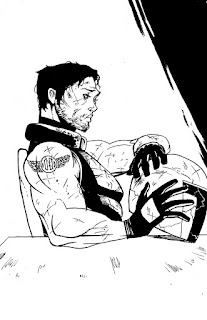 Ididian Incident report form:
[Please do not sign above this line]
The following report is for incident # 8542, hereby known as “No Zero days”
Since Ididian 7 lost all power during this time no security footage could be found, so we will be having our onsite artist depict the events to hopefully show a clearer time line of what transpired.
Survivor report 16
Interviewer: Please state your occupation.
Survivor 16: Corporal Johnathon “Johnny” Hicks, 4th brigade, Unit Ididian 6, sir
I:..
[Interviewer pauses and double checks notes]
I: You’re… “Johnny One”… You’re the sole survivor of the Ididian 6 massacre?
S16: Sir, yes, I had my headphones on at the time and did not hear Big Sister #6, aka Contained #687679, speak into the intercoms. Saved my life. Sir.
I: I thought you were on leave after those events with honorable discharge? You must have seen some horrible things.
S16: yes, sir, I did. I volunteered for the security detail of Big Sister #6, aka Contained #687679, to Ididian 7. So many of my friends died, felt like the right thing to do, to add closure to the events that transpired at Ididian 6 and for myself, sir.
I: So that makes you the survivor of two horrifying events under Ididian?
S16: Sir, yes, sir. At the very least I was able to make sure I wasn’t the sole survivor this time, sir.
I: So I’ve heard, seems you and First Lieutenant C. Montgomery Maul--
S16: Captain Montgomery Maul with all due respect sir.
I: ummm yea, you two seemed to have saved a lot of lives in th--
S16: Sir, no sir.
I: excuse me?
S16: It was I, Captain Montgomery Maul, Gerald, Emily, formally Big sister #4, and…and C.J..
…Sir
I: can you elaborate.
S16: Maul and C.J. saved me during the initial break out, after days of helping people in the building, we discovered that Big Sister #1 had created a danger level 5 being; she had hopes of using it to destroy Ididian Co. and eventually this dimension. Maul somehow got in contact with his black ops team that entered the building through unknown means. Maul’s plan was simple, him and his Unit would distract Sister #1, while C.J. Gerald, and I, would sneak around the building and find Emily’s pencil. Maul’s plan was to use Emily’s abnormality to “draw” all the big sister’s out of existence. Due to several traumas suffered during the initial break out, Emily refused to draw. It was C.J. who came up with the thought to get her drawing materials to maybe get her to draw again.
The plan went smoothly till, during the distraction, Sister #1 figured out our plan and “activated” somehow Big sister #0. Maul grabbed the pencil and informed us all to get to the roof where the fight was less likely to harm those hiding in safe rooms below. Sister 0, fought Maul’s Black Ops team to the roof, however the integrity of the top floors began to give way, two members of the Black ops team fell to the ground. I was able to grab Maul, who grabbed C.J. and Emily. While the remaining members of the black ops and Gerald distracted Sister 0, I tried to pull them up…
However the weight was too great and I could not hold on, I believe C.J. realized this, told Emily something I couldn’t make out over Maul screaming for them to hang on. C.J. then bit Maul’s hand forcing him to let go…
[Corporal Johnathon “Johnny” Hicks pauses, clutching his helmet]

C.J. saved us all. I was able to pull them all up after this. Maul got Emily the Pencil and she thought for a few seconds while sister 0 raised hell around us. I provided cover fire while she drew, I then looked down and saw she her in tears drawing Big Sister #3 (the angel one) fighting Big Sister #0.

At this point there was a flash of light, and all I remember is being woken up by Ididian security among some rubble several miles away.
Sir.
I: that’s quite the story soldier…
S16: sir, yes, sir.
I: As far as this is concerned, have you told anyone else…
S16: sir, no sir.
I: Then I’m initiating Ididian protocol 62.
[Several armed guards enter room with guns drawn]
S16: no, P-62 isn’t for this!! I’ve done nothing wrong… You can’t cover this up!! Everyone in Ididian went through this.
[Three guards grab Corporal Johnathon “Johnny” Hicks and drag him away]

I: True, but not everyone saw what you have, and I can’t have someone knowing Ididian created several of the Big Sisters. Thank you for serving your country solider, I’ll be sure the president speaks at your fune--
S16: YOU ASSHOLE, I REFUSE TO BE KILLED BY YOU AFTER ALL IVE SURVIVED!! GERALD SAID YOU’D DO THIS! BUT I BELIEVED IN IDIDIAN!!!
[Corporal Johnathon “Johnny” Hicks is punched in gut by guard]
S16: he said you would do this… That the company was beyond him… Well f[redacted] you Thomas…
I: How do you kn--
S16: IDIDIAN PASS CODE#1876082082892-0 ALPHA 3!!!!!
I: WHAT!??! WHO TOLD Y--
S16: Go f[redacted] yourself Thomas… You and your little rat backers have stained the purity of Ididian.
IDIDIAN IN, IDIDIAN OU--
[Corporal Johnathon “Johnny” Hicks is knocked out by a guard]
Unnamed Guard: what should we do?
I: Whoever told him that pass just saved his life, and I’m pretty sure I know who. Put him in the brig till we decide what to do with him.

“No Zero days” death count is estimated to be 499 and 183 Contained at this point.
Posted by Michael Johnson at 12:57 PM